Prior to practicing law, Mr. Ortega was the founder of Houston Business Bank, where he served as a Director, and President & Chief Executive Officer. The bank charter he founded was one of only four awarded in the State of Texas that year, and Houston Business Bank was one of less than a dozen banks to receive FDIC insurance nationally in 2009. Mr. Ortega has more than 20 years of banking and financial services experience, including stents at JP Morgan Chase and Wells Fargo Bank in the commercial lending arena. Mr. Ortega has been recognized for his efforts in both the professional world and in the community, having been recognized as one of Houston Business Journal’s 40 Under 40 Award in 2011 for his work in starting and managing Houston Business Bank, and the 2012 Pillar of Fairness Award for the North Side Independent School District in San Antonio, Texas for his commitment both to the banking profession and to mentoring young students. He has been involved with various community organizations such as Class 26 Leadership Houston and sits on the board of Big Brothers/Big Sisters Program. Mr. Ortega resides in Houston Texas with his wife and three children.

Currently Mr. Ortega’s practice focuses on representing banks and middle market companies on a wide range of matters, including, but not limited to, commercial real estate, lending, securities, corporate governance, compliance, regulatory, cybersecurity, vendor management, contract negotiations, and M&A. In addition, Mr. Ortega also focuses on representing Middle Market companies. Some recent transactions include, but are not limited to: 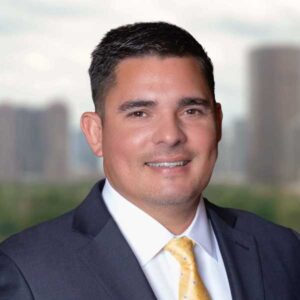